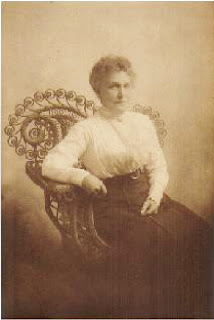 The first time my mother mentioned Frances Eugenia it was to tell me that it was she who had loved and owned the cherry-wood bedstead that came went with the family to Colorado Springs. It traveled slung over the necks of the oxen that pulled their covered wagon. I played on this bed when I was a child and my mother cherished it as a memory of her Grandmother. It was a beautiful piece of work; turned wood that felt like satin to the touch.
Along with being a gifted cook and tatting, mending clothing and doing beautiful embroidery when she had time, she did plain sewing in delicate little stitches.
It seemed very unfair to me that her children are listed under the name of a husband who battered her and abused them all in various ways. So since in this I have all the control I could want along with doing all of the work I am listing the children as hers alone.
She married Joseph Ellis McReynolds on August 5, 1866, so she would have then been 16 years of age. She had been born in Coshocton County, Ohio, July 8, 1849. 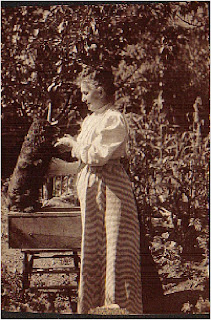 Researching Frances Eugenia is work still ongoing. This is the line from which I was told the Cherokee heritage originates. I believe the infant noted below is Frances Eugenia, named for a second French Empress to match the first daughter, named after Josephine.
The question of Frances Eugenia’s origins bring us to the question of her relationship with her husband who abandoned her and her children to run off with a saloon girl by the name of Elizabeth Wilson.

Later my mother, Mary Alice Reasoner, visited him and Elizabeth when Darling Daisy, her mother, took her to their tiny run-down house at the bottom of the hill from the large home occupied by her aged parents. This visit took place in Indiana not far from Fairmount.
That is all of the information Mother gave me specific to her biological father and Elizabeth Wilson, his second wife.       I believe it was all she remembered. She was not yet 12 when the visit took place. The visit was tense and brief.


I believe Frances’s father's name was Mathew. During the period of American history families were on the move constantly looking for new land for large broods of children. The Trail of Tears was still wet and many Cherokee were passing as white. 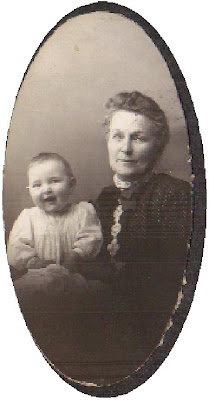 After arriving in Colorado Springs Frances Eugenia made a living for herself and her children working as a housekeeper for a retired gentleman. She had many friends and was highly respected for her good cheer, hard work and gentle ways.
The Maude who contributed a recipe for dressing in our cookbook was a friend of hers. Frances Eugenia died of pneumonia in 1921, rarely having seen her grandchildren by Darling Daisy after Daisy took them away, first to Chicago and then to 40 different homes in the next 15 years.

Mother left Colorado Springs too early to remember very much about the family into which Frances Eugenia was born and finding them has been a long and exasperating process.
Posted by Melinda Pillsbury-Foster at 8:11 AM No comments: